Don't forget - iOS 8 download links here. Apple executives introduced the next version of its mobile operating system - iOS 8. All roughness of the previous "Seven" that so much an eyesore , suddenly disappeared in the new update, and their place was taken by new opportunities with unique features within iOS. Even the wild , because imagine a mobile OS from Apple and third-party widgets keyboards to this day I could not .

During the conference, the scene voiced phrase «iOS 8 - this is the biggest release of iOS». And if all graphically just got to look a little more subdued , with fewer dynamic animation in iOS 7, the functional things have changed . 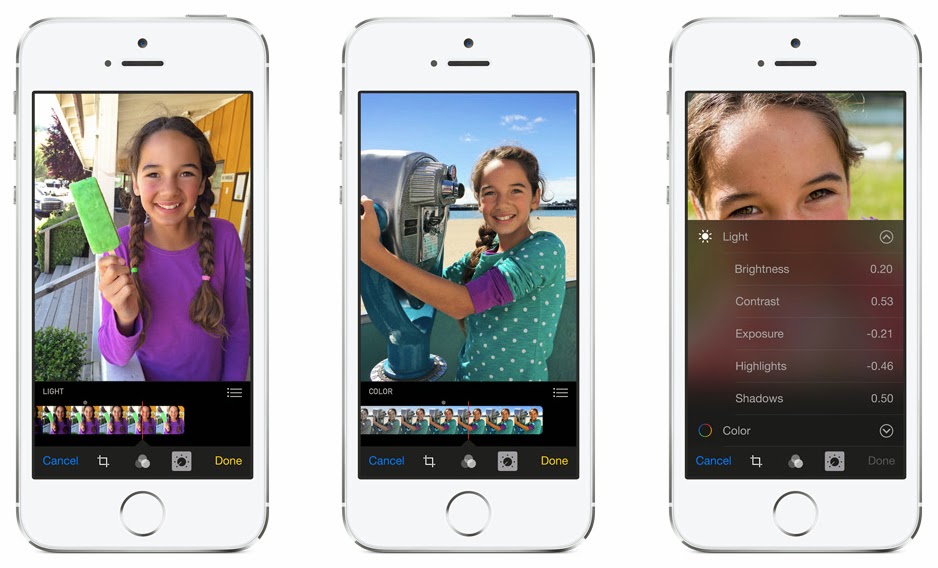 Along with the new rates for cloud storage feature was introduced iCloud iCloud Photo Library. Now all the pictures and videos can be stored in the cloud, there to create albums , edit them , and look at this store and according to locations.

Standard means of image you can now make candy . For example, right in the app "Photo" have the opportunity to align the horizon qualitatively or crop the photo . Here a few of Taps can set the shutter speed , brightness, contrast and more.

There is even photographic filters as in Instagram. Along with iOS developers Photoprogram 8 from the App Store will be able to develop your own filters to the standard application , you simply need to give the go-ahead to use them , tap on the window appears .

The standard Camera application appeared tab Time-Lapse. It is a new mode that lets you capture interesting scenes in the new accelerated format. 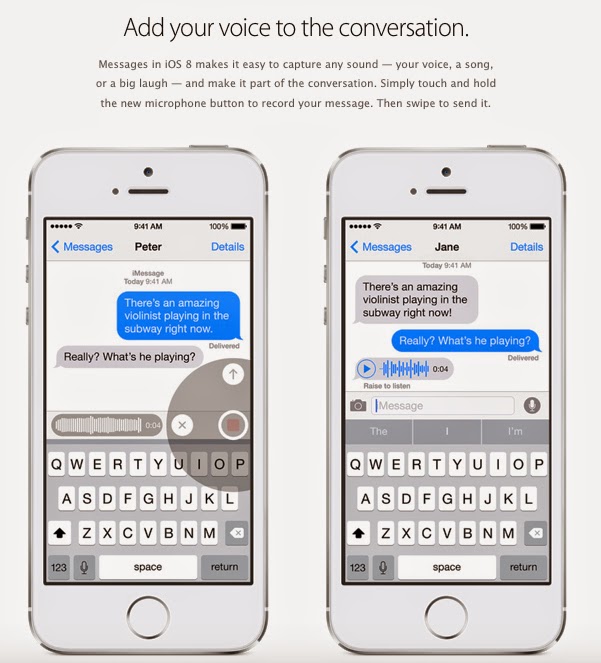 New application "Messages" - it's a killer of all existing messengers of App Store, as WhatsApp, Telegram and others. Let it not happen so quickly, but all to go . Judge for yourself . For example, in the program now have the ability to send instant audio messages . Video, we also can send .

Chats in the "message" is also created in the image and likeness , for example , WhatsApp, only with simplicity and minimalism inherent developers of Apple. Chats can now call it, add / remove buddies or function include "Do Not Disturb" if chat turned to mush from messages. Do you want share location? Easily. DO you want send several photos, videos, audio files? Too easy, they are also lined up in a nice gallery. 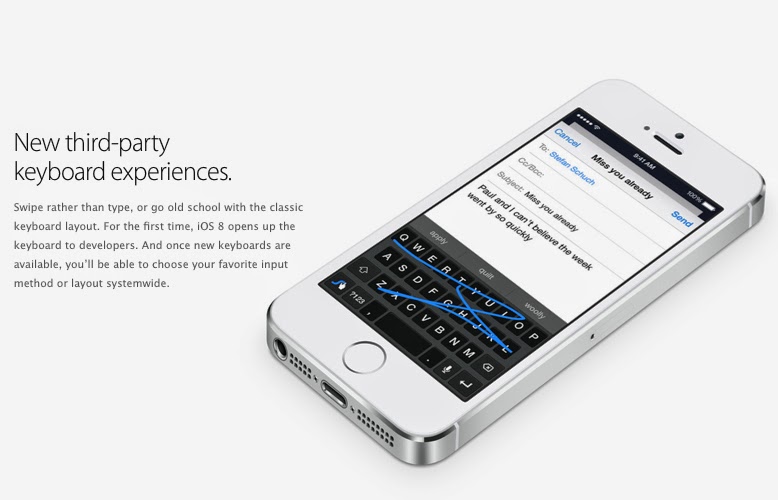 8 appeared in iOS predictive text input when the screen falls possible words , when you type the first few letters. The system will not just pour a huge amount of options , no, she's smart. So your iPhone when issuing words will always know whether you are communicating with one another in a message or send an important letter boss.

And most important - Apple has opened the way to the App Store side of the keyboard , so get ready to experience on your iPhone strength and power technology fast typing Swype. Of multiple keyboards in the system can be selected as the main one .

Family sharing - another functionality that was asking for several years. And boom! It is now available on iOS 8. Now to one account can connect up to six family members and co-buy software, applications, music and more with the same credit card. No longer need to give someone your accounts and passwords, just add a person and you will receive an automatic notification that this person is trying to buy something with your account.

Other built-in programs will also be displayed together with the users of the same account information. For example, will be divided into Photostream photos of each family member can be put on the calendar alert for individuals, as well as watch their location on the map.

iCloud Drive - USB flash drive is a cloud with a large volume on which to store any files. In general, as DropBox, only cooler. More information on this functionality can be found on apple home page.

New Health standard application will be the center of all sports applications and software for tracking health. It will store all the information that may be available to your doctor . I understand at the moment is a project - germ, which soon will be actively developed with the help of software developers in the App Store


iOS 8 Review: On iOS, 8 had such a useful system interactions with OS X, when you do not have to approach the iPhone, and Mac can be a conventional headset , smart dropdown notification , comfortable gestures in the mail, a list of favorite contacts in the list of running applications, and much more . Changes just a million and they will be presented in our traditional large-scale survey iOS 8 with screenshots and videos. The system is already actively tested on iPhone 5/5s.
Share this
Newer Post Older Post Home