macOS Mojave is HERE. Apple could not ignore the operating system for computers, the next version of which was called macOS Mojave. Here is macOS Mojave download links for developer and all who want to install without developer account.


The public macOS Mojave beta will be available later this year, the final version in the fall.

The first, as pointed out by the company's representatives, is the appearance of a full-fledged "night mode". It does not bring additional features, but it looks good.

In the macOS Mojave, there are new ways to put things in order on the desktop: using the built-in function, you can combine files of a similar type (similar to folders). Thus, pictures are grouped with pictures, PDF files - with PDF files, video - with video and so on. 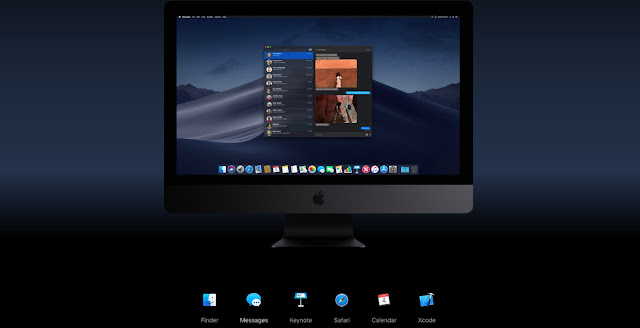 The new version of the OS significantly strengthens security, the user gets more tools to restrict access to applications and the system hardware (something similar can be seen in iOS). That is, you can control, for example, programs access to location, photos, contacts, microphone. Browser Safari also became more attentive to user data, blocking, in particular, the surveillance from Facebook.

There was a "gallery mode" in which when scrolling files the one that is in focus is enlarged for easy viewing. Metadata has become more detailed, they can be edited directly in the Finder.

In the "quick view" mode, you can make some adjustments to files, edit screenshots and record video from the screen or its area. In addition, the files can be automatically merged into a PDF document.

The new macOS Mojave feature allows you to instantly transfer photos from your iPhone to your computer - this is the responsibility of Continuity Camera. It works with standard applications for the OS.
Share this
Newer Post Older Post Home