Posted by: Jailbreak - iOS 10, iOS 10.2 Jailbreak
iOS 10.2 jailbreak for iPhone 7, iPhone 6S, iPhone 6, iPhone 5S and all supported iPads. We know that Apple seeds their new iOS 10.2 for all who want to install last version of iOS. iOS 10.2 has new security features and updates. 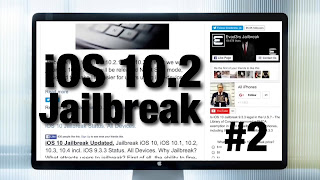 We advised the owners of iPhone and IPad, who are waiting for the iOS 10.2 jailbreak, do not switch to iOS 10.2 or downgrade to version 10.1.1, if the device is already updated. If the exploit future will be compatible with a newer version of the OS, users will always be able to move to a new release. Last leaked information leaked that new iOS 10 jailbreak will be released for all iOS 10.1.1 devices, but not for iOS 10.2. If you want to make iOS 10 Jailbreak, you must stay on iOS 10.1.1.

iOS 10.2 has new Emoji, new widget for video and a comfortable setting to save the settings of the camera during the making of the photo. Fresh wallpaper also appear that you are waiting impatiently. Apple's, apparently, decided to upgrade the existing Emoji to make them more realistic. Naturally, the next update of the operating system improves its stability. That's all.