What models will iOS 14 support? 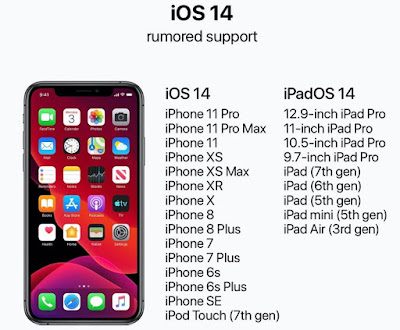 The iOS 14 operating system is of interest to owners of Apple mobile devices. Especially considering how unsuccessful iOS 13 was at the time of its debut.


The information below is based on an analysis of the available data and the words of a well-known Chinese analyst Ming-Chi Kuo from TF International Securities, who often turns out to be right in his forecasts. Also, a lot of data about the new iOS 14 comes from media. Don't forget read more about iOS 14 release date.

With the exception of the latest iPhone 5S and iPhone 6, equipped with A7 and A8 chips, respectively. If this information turns out to be true, the iPhone SE and iPhone 6s smartphones will get support for iOS 14.

iPhone 6s was introduced in 2015, and Apple devices are usually supported for 5 years. These five years end this year. The same story was with the iPhone 6, which was released in 2014 and was no longer supported in iOS 13, released in 2019.