This new untethered jailbreak is compatible with all devices like: iPhone 5,4S, 4,3GS, or iPod touch on the newly released iOS 6.1.3 and 6.1.2 firmware. 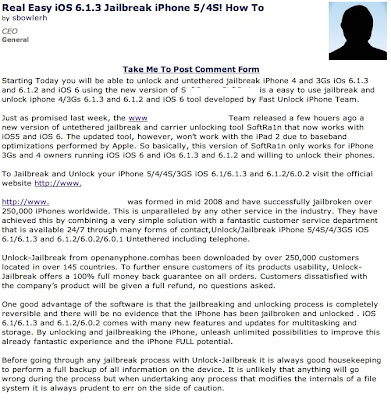 This untethered jailbreak and unlock iPhone 5/4/4S/3Gs is running on an tools developed by the experts, who tested it on iPhones and iPads last week before releasing it over to the rest.

iOS 6.1.3 was originally untethered jailbroken and unlocked last week but it was limited to tethered boot and it did not had the unlock option. But now, this new version of ..... we can jailbreak and unlock iPhone 5/4S/4/3Gs, fully untethered on iOS 6.1.3". Don't believe it. It's fakers.


"We are not working on a 6.1.3 Untethered Jailbreak, that would be too much efforts for a minimal update. We're waiting for a major release. "(Pod2g)